What is VFD Panel?

The VFD Panel (Variable Frequency drive panel) also known as VFD Control Panel are designed to control the speed of the electric motor and feed pump. They are widely used in drilling, pumping and other large machine applications like Conveyor and Compressor.

AC motor speed is controlled in two ways – either by controlling the voltage or frequency. Frequency controlling gives better control due to constant flux density than voltage control. This is where the working of VFDs comes to play. It is a power conversion device which converts the fixed voltage, fixed frequency of the input power to the variable voltage, the variable frequency output to control AC induction motors.

Most of the industrial applications require variable speeds at peak load conditions and constant speeds at normal operating conditions. Closed loop working of VFDs maintains the speed of the motor at a constant level, even in case of input and load disturbances. 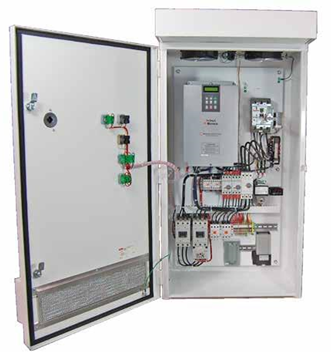 The two main features of VFD are adjustable speeds and soft start/stop capabilities. These two features make VFD’s a powerful controller to control the AC motors.

Variable frequency drives not only offer adjustable speeds for accurate and precise control applications, but also have more benefits in terms of process control and conservation of energy. Some of these are given below.

More than 65% of the power is consumed by electric motors in industries. Both magnitude and frequency control technique to vary the speed consumes less power when variable speed is required by the motor. So a great amount of energy is conserved by these VFD’s.

VFD allows accurate positioning of the motor speed by continuously comparing with reference speed even at changes in the loading conditions and input disturbances like voltage fluctuations.

Induction motor draws current which is of 6 to 8 times the nominal current at starting. Compared to conventional starters, VFD’s gives better results because it delivers low frequency at the time of starting. Due to low frequency, the motor draws less current and this current never exceeds its nominal rating at starting as well as operating.

It offers smooth operations at starting and stopping and also reduces thermal and mechanical stress on motors and belt drives.

We offer VFD Panels conforming to the following specifications:

( Certain content is taken from sources, owned by those writers and companies, not propriterary of CSESolutions and we thank those companies for the same)